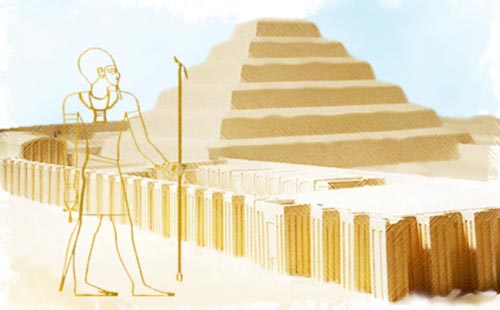 We pieced together our information about the history of Re Hu Tek through through deep trance channeling sessions over a number years from Anita Burns. Anita channels light beings, Johar and Simon, who have been invaluable in helping us piece together the lineage of Re Hu Tek. They have also led us to research material that revealed the answers to many of our questions.

Note: For the most part this information is just for interest’s sake. Allen Burns had a past life in Egypt that affected his present life and thus this information was valuable to him to  help work through some of the issues that came from that life. This history has little bearing on the present incarnation of the Re Hu Tek system that we developed.

The pre-curser to the Re Hu Tek

The pre-curser to the Re Hu Tek lineage is ancient and came to Earth around 10,000 years ago to individuals who were spiritually aware enough to handle and use it. It was kept active through chosen people who would continue the lineage. Descendants (soul lineage descendants) of these original  adepts are now bringing it back to our present time in this body of work.

The history of the Re Hu Tek lineage (Re xhu tet’k) starts in Ancient Egypt through a man called Imhotep.

Around 2665 BC, Imhotep, at about the age of 14, was re-awakened to the energy by two “visitors” who came to his home. This may have been a dream or an out of body experience, but an initiation took place that awakened him to greater consciousness. Imhotep was curious, extremely intelligent and full of wonder for the mysteries of life. Through the Re Hu Tek energy he gained a close connection with his Higher Self so that new information and creative ideas flowed within him as never before.

From commoner parentage, Imhotep grew up to become Vizier and High Priest under the Pharaoh Zoser. Imhotep revolutionized Egyptian culture and religion and transformed Egyptian sciences, mathematics, and medicine. In religion, he is thought to have reintroduced the idea of reincarnation and karma.

He was an architect, designing the Step Pyramid and the Saqqara Temple complex in Egypt.

He was also an accomplished astronomer, poet, sage, physician, and healer. His medical writings were well known by the Greeks during the Roman period, and Claudius and Tiberius placed inscriptions praising Imhotep on their Egyptian temples. Imhotep was later deified and associated with the demigod Asclepios, “God of Healing.”

Imhotep is also credited as a founder of the Egyptian, and Masonic, mystery traditions.

Imhotep reawakened the connection to the energies in a promising student (the soul who would become Allen Burns). That student was eventually placed in charge of the mystery school where the Re Hu Tek energy was used for, among other things, consciousness raising and healing.

This soul incarnated into Egypt again during the reigns of Akhenaten, and Tutankhamun, He was named Aten Ka (Sun Spirit). He was high priest of the Egyptian Re xhu Tet’k  Mystery School.

In Egypt those who practiced Re xhu Tet’k, belonged to a semi-secret society and an ancient mystery school. This mystery school, like mystery schools everywhere in the ancient world, such as the Eleusin, Essene, Dionysian, or Khu, taught outer mysteries that anyone could participate in. These teachings were not secret. The outer mysteries involved concepts of reincarnation, karma and the afterlife.

The mystery schools also had inner teachings, which were secret. Only a few students were chosen each year to apply for the inner teaching initiatory process. Not every applicant was accepted. The Re xhu Tet’k school was unusual for its time because it initiated women along with men. They knew the power of the balanced forces of masculine and feminine working together.

In choosing who would be allowed to undergo the initiation process, the Re xhu Tet’k priests would look for certain patterns in the potential initiate’s aura, a certain spiritual awareness, and a dedication to spiritual growth.

The accepted students left their homes and joined the mystery school community during the preparation period of at least three days. After that, although they were sworn to secrecy, they could rejoin their families while studying. Following “graduation,” they might be asked to join the commune. If they were not asked or chose not to join, they were never allowed to take advanced training, which was very secret.

Preparation for initiation consisted of exercises and meditation at power spots along the Nile. Saqqara was a prime spot because of the step pyramid. We believe that Cheops (the great pyramid) was also used for these ceremonies.

Re Hu Tek has been passed from master/priest to student throughout the ages. And, as with other powerful techniques of this sort, the “seeds” of the ability to use Re Hu Tek is also passed on through lifetimes; it only awaits an awakening each time.

The Present Incarnation of Re Hu Tek™

The energy we now call Re Hu Tek came to Allen Burns in 1979 through a small religious group. The leader who started the group was a person of great potential power who used the energy without knowing its origins or true nature, so he filtered it to fit his strong Christian beliefs.

Through Allen’s experience in that group, the Re Hu Tek energy was reactivated in him. Allen had a profound experience with the Re Hu Tek energy and began helping others with it in ways outside the religious group’s narrow definition. Allen knows that Re Hu Tek cannot be confined by religion or dogma and must be used for the good of all. He left the group and started looking for answers. This eventually led him to his wife, Anita.

With the help of Anita, through her life of experience, Allen uncovered lost memories of their role together in evolving the Re Hu Tek in ancient history. They discovered ways to use the Re Hu Tek energy in modern times, outside any religious contexts. They developed a way to pass the energy on to others in an attunement process. Re Hu Tek today can be used even more powerfully because it is unencumbered by religious doctrine and rules.